At the Tamarind’s Foot – Decisions

I have never understood why our city lost the tradition of celebrating its birthdays; I have searched the archives and asked the elders: -Nobody knows!

And one day when the bells of El Carmen rang out announcing the beginning of the celebrations for the 300th anniversary of the foundation; when I saw the neighbours flooding the streets and the portals full of stalls; and the children running before “the Kid with the Boot”: then I understood the magnitude of the tradicide[1]A play on words that combines the words Tradition and Homicide to refer to the fact of “putting traditions to death”. happily overcome. Men should never lose the memory of their peoples.

If you are visiting our three-hundred-year old town that we know today as Santa Clara, we highly recommend you to visit a park called El Carmen, since it is an integral part of our small local history. 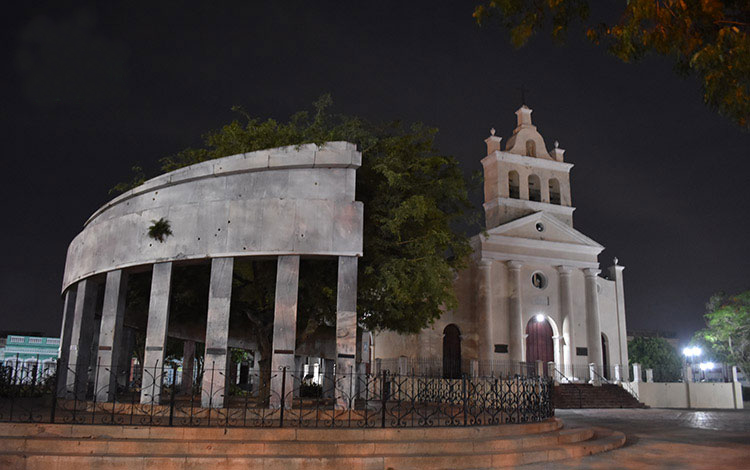 There, in the Parque del Carmen you will find a church that in colonial times, at certain times, was a prison for local[2]The original text in Spanish uses the demonym villaclareñas to refer to local patriot women patriots as recalled by a bronze plaque that is in front of it. There is also a marble monument in the form of an ascending spiral that has 17 columns with the family names of those who according to an old tradition were the founders of the town and next to it you can contemplate a tamarind tree that is part of our history.

According to an old tradition that the historian Manuel D. Gonzáles published in his work last century, back in 1689, 17 families of the village of San Juan de los Remedios, located on the north coast of the current province of Villa Clara, terrified by the frequent assaults and outrages of corsairs and pirates that on more than one occasion had plundered the population, decided to move to a more protected place in the interior of the country, which they did on July 15, 1689, settling in the Orejanos quarter of the Ciego de Santa Clara hacienda. After hearing mass at the foot of a leafy tamarind tree on the top of a small hill, they began to erect the first buildings.

This is the essence of the famous and ancient tradition about the foundation of Santa Clara, which after extensive and deep research carried out by the historian Natalia Raola Ramos, recently deceased[3]At the time this work was printed, 1993., it has been distorted and has remained just that, an old tradition or legend among the many that the city has.

In order to get to know the historical truth, it is necessary to start from an event that took place on July 29, 1646, that is, 43 years before the date of the foundation, when the Cabildo of Sancti Spíritus, which at that time had jurisdiction over large extensions of land in the central region of the Island, granted a ranch named CIEGO DE SANTA CLARA to a neighbour of Remedios named Antonio Díaz y de Pavia, married to Graciana Tamayo Reinoso, also from Remedios, who immediately went to live in the hacienda. There they procreated an extensive family whose main economic activity was an active trade of ransom (contraband) with the so-called buccaneers (individuals who prowled the coasts mocking the commercial monopoly that Spain had imposed on its colonies).

As the years went by, the family nucleus headed by Antonio Días came to be made up of 138 people whom Natalia Raola calls THE BIG FAMILY because she considers them all as one.

Remedios, which at that time had only 600 neighbours, faced serious problems, the core of the matter was the criteria that existed regarding the transfer of the population to another place or to leave it in its place of origin.

There were three criteria that were debated among the remedianos; a group was in agreement with what the priest José Gonzáles de la Cruz was requesting, who was pushing for the transfer to his hacienda called El Copey; others were supporters of the priest Cristóbal Bejerano Valdés, who was in favor of the transfer to his property, the hacienda called Santa Fé; A group of landowners from Remedios headed by Jacinto de Rojas, Bartolomé del Castillo and Juan Jiménez were opposed to any movement of the town because their economic interests were close to the urban center and it would be detrimental to them.

The extremes that were reached in this heated debate about the possible transfer of Remedios, are extensively and interestingly described by the researcher Dr. Fernando Ortiz in his work of great historical and folkloric value entitled: A Cuban fight against demons, which was even made into a movie a few years ago. According to Dr. Fernando Ortiz, the priest José Gonzáles de la Cruz preached in his sermons that the whole town was in the power of demons, even making a census of them that showed a total of 800,000 demons of all kinds who had the purpose of destroying Remedios and its inhabitants. Using these supposed diabolical threats, the priest incited the neighbours to move to his hacienda without further delay. It is clear that both Gonzáles de la Cruz and Bejerano wanted to obtain a personal benefit with the movement of Remedios to their respective properties, since the plots would be sold to those who would build their homes there, and at the same time they would have abundant labor force to exploit their farms.

In this debate, the economic interests of the so-called Big Family played a preponderant role due to their urgent need to have a fixed point for their licit and illicit commercial activities, and it was their opinion that became decisive.

At the Tamarind’s Foot – Foundation

The Prohet talk about cubans